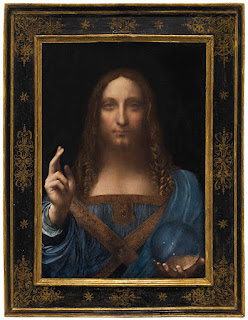 Leonardo da Vinci‘s Salvator Mundi (circa 1500), billed as the last known painting by the Renaissance master in private hands, sold at Christie’s for $450.3 million. It is, by far, the most expensive work of art ever sold at auction. In fact, the price is more than double the next most expensive work ever sold, Picasso’s Les femmes d’Alger (Version ‘O’), which fetched $179.4 million in 2015.

The work went to an anonymous client of Alex Rotter, Christie’s global co-head of contemporary art. Before a packed salesroom and scores of camera phones held aloft, bidding opened at $70 million. At $190 million, five bidders—four on the phones and one in the room—were still chasing the painting.

The 19-minute contest eventually came down to Rotter and Francois De Poortere, the head of Christie’s Old Master painting department in New York.

At $352 million, auctioneer Jussi Pylkkanen produced a glass of ice water from behind the rostrum and took a sip.


After a protracted bidding war in which Rotter’s client continued to bid in increments as large as $30 million—and De Poortere’s client bid in smaller steps of around $2–5 million—the work hammered down for $400 million to a flurry of applause (and a few gasps). With the auction house’s fees, the final price was $450.3 million.

The painting was one of 58 works included in Christie’s evening sale of postwar and contemporary art on Wednesday at Rockefeller Center in New York.


The Leonardo painting has a dramatic backstory that involves a royal family, an estate sale, and a contentious lawsuit. Originally commissioned for the French Royal collection, it went missing for decades. In 2005, a consortium of dealers spotted the painting at an estate sale and had it authenticated as a bona fide Leonardo. In 2013, they sold the work to Swiss dealer and so-called “freeport king” Yves Bouvier for a price reportedly between $75 million and $80 million.

Bouvier then flipped the work to Russian billionaire Dmitry Rybolovlev for a reported $127.5 million.